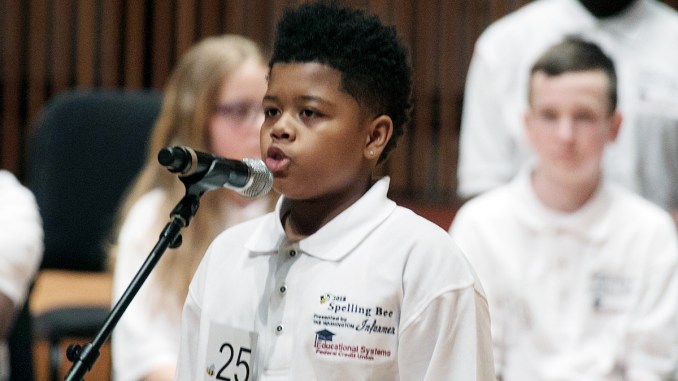 Kayden Wilkins, a 5th-grader at Melwood Elementary School in Upper Marlboro, is the winner of the 2018 Prince George’s County Spelling Bee held at the Clarice Smith Performing Arts Center on the University of Maryland’s College Park campus on March 16. He will represent the county at the Scripps National Spelling Bee at the Gaylord National Resort and Conference Center on May 31. (Shevry Lassiter/The Washington Informer)

Kayden joined 5th- through 8th-grade students representing 33 schools across the county on the stage at the Clarice Performing Arts Center at the University of Maryland, College Park campus and vied for the opportunity to represent the county in the National Scripps Spelling Bee in June at National Harbor.

Pronouncer Dave Zahren, a television instructional specialist with Prince George’s County Public Schools, offered each word, along with its definition, word origin and usage, to the nervous spellers, who went eight rounds before the final word was spelled correctly.

“I am so proud of all of you,” Prince George’s County Executive Rushern Baker told the students. After sitting through the first round, Baker wished them well.

This was the first year that fifth-graders were included in the bee, said Chauka Reid, the bee’s coordinator.

Fifth-grader Andre Stewart of Bowie Montessori Children’s House was excited by his opportunity to compete.

“My grandmother and my family gave me the motivation to compete,” Stewart said.

“We are excited to see so many parents and supporters of Prince George’s County’s top spellers here with us tonight,” said Denise Rolark Barnes, publisher of The Washington Informer and president of Washington Informer Charities. “Your presence helps to encourage these students who are already winners because they competed and won in their respective schools.”

Rolark Barnes commended Reid as “a committed, hardworking and dedicated proponent of the spelling bee and a strong advocate for the children enrolled in the Prince George’s County Schools.”